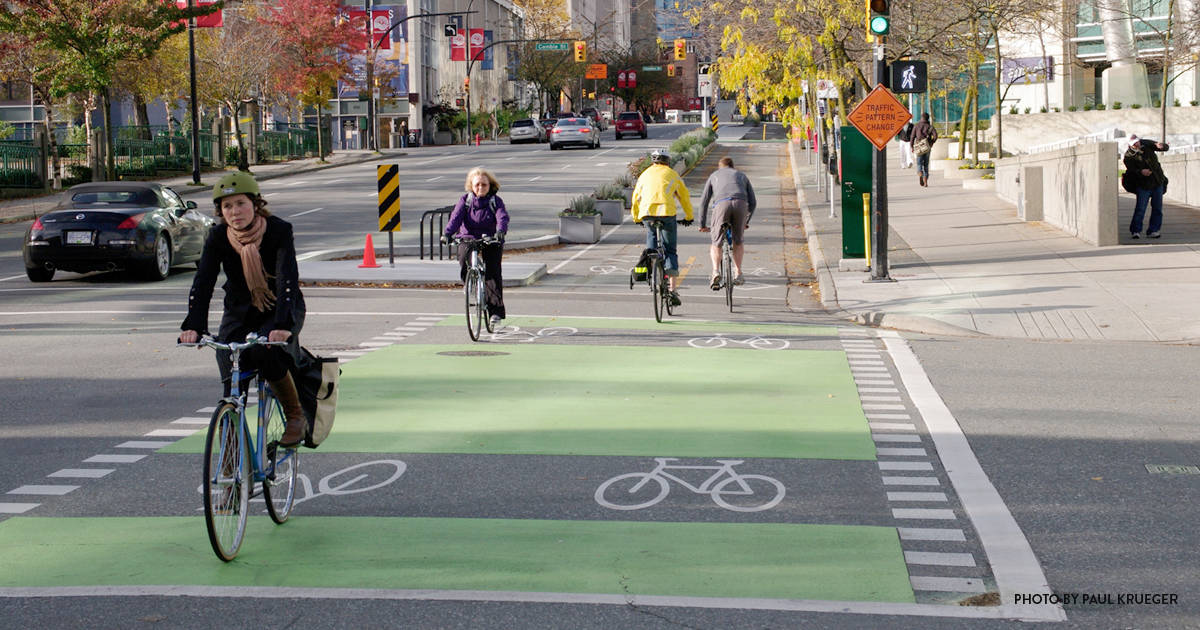 Complete Streets is a national movement to promote  inclusive roadway design that meets the needs of all users, including people of all ages and abilities riding bikes, waiting for the bus, or simply walking to get from one place to another.

CalBike, working in partnership with other transportation, environmental, and health advocacy organizations, has taken the lead to establish Complete Streets statewide in California.

What Are Complete Streets?

Complete Streets are designed and operated to enable safe access for all users.  Pedestrians, bicyclists, motorists, and transit riders of all ages and abilities must be able to safely move along and across a Complete Street.

Complete Streets are an essential component of transportation equity. They are streets where buses can run on time because the lanes aren’t clogged with cars. Those who can’t afford an automobile still have the freedom to move safely and conveniently through their city on Complete Streets.

In September 2008, Gov. Arnold Schwarzenegger signed into law Assembly Bill 1358, the Complete Streets Act, co-sponsored by the California Bicycle Coalition and AARP California, and authored by Assemblymember Mark Leno of San Francisco. AB 1358 required all cities and counties to consider all users of city- and county-owned roads when they update their general transportation plans.At the same time, the California Department of Transportation updated their own policies (see Deputy Directive 64) to apply the same “complete streets” philosophy to state-owned roads.  Unfortunately, despite AB 1358, plenty of advocacy, and their own directive, Caltrans routinely fails to make complete streets safety improvements when repaving streets they own.   They indeed consider safety improvements, per policy, but too often they summarily reject the idea. “We thought it about it, but making safety improvements would slow down car traffic so we rejected the idea,” is the common refrain.

Two years ago, Senator Scott Wiener authored a bill to hold Caltrans accountable for including Complete Streets in its repaving and repair projects. The bill did not advance because =the priority in the Senate was increasing the gas tax and road fees to pay for repaving. (That was the perfect time to make sure we were using that money wisely, we thought, but a majority of senators disagreed.) Last year, the same bill died in committee because of the threat of Proposition 6, which would have rescinded the road funding increases. Now that voters have resoundingly defeated Proposition 6, we believe the time is ripe for a Complete Streets law that will transform our streets for the better, in the most efficient way possible.

In January of 2019, Senator Wiener re-introduced the bill to strengthen California’s complete streets requirements. The Complete Streets for Active Living Bill, SB 127, will flip the script and mandate the inclusion of bike and walk facilities in any Caltrans rehabilitation project unless Caltrans holds a public hearing where they justify an exception to the requirement. CalBike and our partners are now hard at work on continuing our Complete Streets Campaign.

Sign our petition to show your support for Complete Streets.