A leading pedestrian interval (LPI) gives pedestrians a 3- to 7-second head start on a walk signal before the parallel car traffic is given a green light. This simple, low-cost adjustment has been demonstrated to lower pedestrian-on-vehicle crashes by 13%. In 2022, CalBike advocated for a measure that will expand the use of LPIs (the recently passed AB 2264).

Expensive, flashy infrastructure projects often attract the most attention, but equally, if not more important, are simple, low-cost solutions that deliver results to everyday road users. The fact that many residents don’t even notice the change to intersections actually speaks to the effectiveness of the measure. State law mandates LPIs at Caltrans-controlled intersections, but local planners should also implement this critical safety measure because it’s a simple step to help combat the rise in pedestrian fatalities.

The Los Angeles Department of Transportation has recently implemented LPI at a limited number of intersections throughout Los Angeles. To get a sense of how LPI informs pedestrian behavior, CalBike recently went to the corner of Normandie and Hollywood to observe crossings and ask people their thoughts on the initiative. We chose this bustling intersection located in East Hollywood with corner stores and businesses on every corner and e-bike share on the northwest corner. It serves a wide array of users during commuting hours on a Wednesday.

Nicole lives a few blocks away and said she recognized the change as soon as it happened: “They put in poles by the turn lanes at the same time.” Nicole indicated that the changes had changed driver behavior making left turns. “I feel safer walking to the coffee shop for sure!” she said.

“They should do that everywhere!” Juan, a retired military serviceman, said. He said he had not noticed the update, though he moved to the neighborhood from Koreatown for its increased walkability. Juan insisted that safety is important and pedestrians should be aware of their surroundings to maximize safety. “You don’t get this old by not being smart!” he said.

Micah lives nearby and was renting a Metro e-bike to take to work in Echo Park, “When you take into account parking, this is the fastest way to get there,” he said. The morning we stopped by was rainy and cold. Micah noticed the early walk signs but was not aware he could cross on his bike. “Good to know,” Micah said before starting his brisk commute down Hollywood Boulevard.

Hollywood and Normandie is situated between two LA Metro stations and serviced by popular bus routes along both cross streets. The flow of pedestrians rises and falls dramatically as buses service the area. Prioritizing pedestrian safety proactively with default LPIs (meaning the walk sign shows on red even without being requested) is a simple and effective measure that increases safety and comfort for people walking in the area.

The evolution of this intersection is emblematic of the changing dynamics of this part of Los Angeles. Several high-density apartment buildings have been built within a one-mile radius of Hollywood and Normandie since 2020, increasing the number of pedestrians at an already busy intersection.

For active transportation to be viable, safety is paramount. CalBike applauds LADOT’s embrace of LPI and looks forward to seeing more LA intersections added in the future. And, with the passage of the OmniBike Bill, AB 1909, bikes can proceed on walk signals, including LPIs, so people on bikes will also get the benefit of increased visibility. 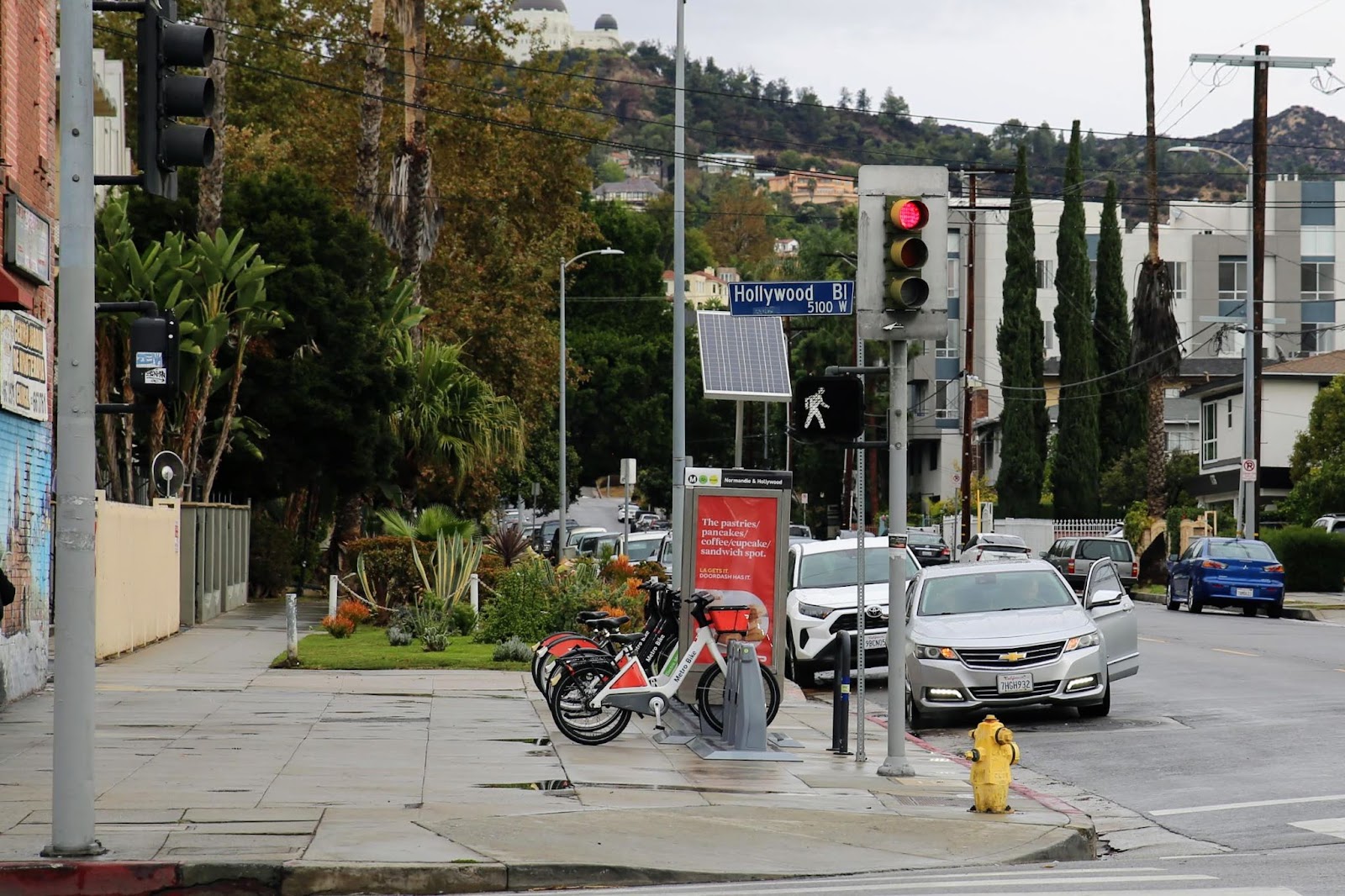